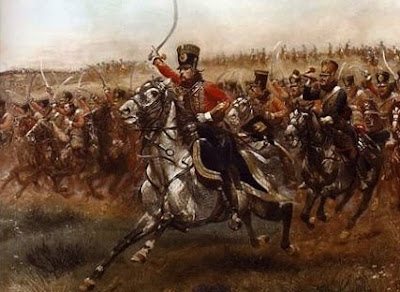 Loved by: Everyone (when he's allied with them); spammers; fans of the cavalry; World War II Russian tacticians.

Loathed by: Everyone (once he's in the lead); those who despise surprise attacks.

I would agree. Reserve is in my top list of Mayfair aliens; certainly no worse than third.

You do have to like the concept of Reinforcements to like Reserve, though. For a long time I wasn't crazy about the concept, because I didn't like the idea of those cards changing the Attack totals at the end (I felt Artifacts, Flares, etc. should have that privilege).

However, there's not an excessive amount of Reinforcements in the FFG deck, and having played with Reinforcements in every FFG edition game and Reserve showing up in two of those, I'm no longer opposed to the concept. Reserve is indeed an elegant and tough power, and if we play a "Draw 3, pick 1" power selection game, and Reserve is one of the choices, I may just choose it.

I tend to agree with you, Rob. Reinforcements always struck me as kind of a brute-force "filler" mechanic: easy to design but not adding much to the game (and subtracting something for those who don't appreciate the retroactivity and randomness). They aren't significant enough to bother me, but I would not have missed them in the slightest had they been absent from the FFG edition.

Having said that, I do think that once one accepts Reinforcements as a tolerable mechanic, then Reserve emerges as a brilliant power. Its obvious benefit (letting me post-modify the Attack delta) actually takes a back seat to its wonderful hand-scrubbing effect. Even had it merely said "As a main player or ally, you may (a) discard any or all of your Attacks of 6 or less and/or (b) discard one Negotiate each time an opposing player plays a Reinforcement", this alien would still have been worthy of selection!

I note with some concern the revised FFG wording, which expands the potential scope of the effect from Mayfair's "absolute value of 6 or less" to simply "6 or less". This seems to imply a global design constraint on the magnitude of any future negative Attack cards.

Amiable brief and this mail helped me alot in my college assignement. Thank you on your information.


Good write-up. I definitely love this site. Keep it up