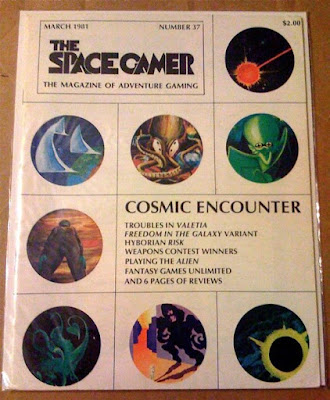 They just don't make general-interest gaming magazines like this any longer, which is a pity. Back in early 1981, when this issue of Space Gamer appeared, a gaming fan had a wide range of periodicals — both professional and amateur — to choose from each and every month.

Anyway, the March 1981 issue of Space Gamer was a fun one for fans of Cosmic Encounter, which hogged the entire cover (bonus points for identifying all of the aliens; click the image to make it larger) and led the issue with a two-page review from publisher Steve Jackson. The verdict, essentially, came down to "I heart you a lot, Cosmic," and, in a testament to Stevie J.'s writing skills, it's a review that still reads well more than a quarter-century later.

Jackson would later visit the world of CE within the pages of Space Gamer for the obligatory "here's a bunch of new aliens" article ... but that's a tale for another day.
Posted at 1:34 PM