The ongoing league action at Cosmic Encounter Online has been re-branded from "March Madness" to "Much Madness," in large part because plans now call for the tournament to extend into April. (Additional trivia, free of charge: March Madness is also a registered trademark).

Dates and times remain the same (Thursdays, 8E/5P), as does the format, which is the basic solo-wins-only variety used for most CEO leagues.

The top of the standings is crowded, with no single player able to take charge yet. Here's the updated standings: 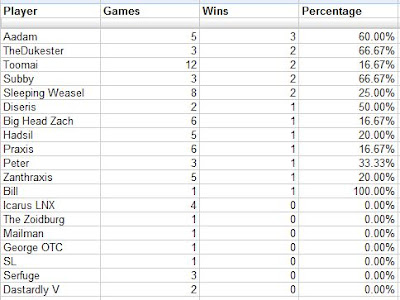 Plain-English power: After Destiny is flipped, send a ship of that color to the Warp.

Loved by: Healer (easy healing), Zombie, Warpish. Vacuum can spread the hurt around to others. Masochist, of course.

Loathed by: Macron, most of all. Kamikaze is no fan of Shadow, either, but Macron is truly hosed by Shadow.

Anything else? The Wild Shadow is an amazing Flare; it's positively nuclear. It says, "As the defense, when you lose an encounter and your opponent played an attack card, you may send one of your ships not in the encounter to the warp to take all opposing ships to the warp with you. In spite of winning, the opposing players do not receive colonies on your planet."

All y'all should probably just give up now

There's a new sheriff in town over at the March Madness league. Let's take a long, loving look at the new leaderboard:

Two wins
One win
Odd note from last Thursday's action: Will was the winning alien in all three games in which it appeared. I would have lost money on that bet. 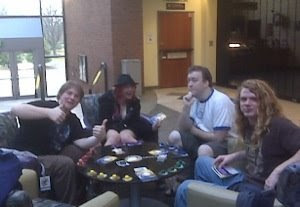 My spies tell me this shot from last weekend's MoMo Con in Atlanta was actually snapped by Greg Olotka, legendary Cosmic Encounter Online code-jockey and son of some guy who created some game once.

The image is a bit small-ish, so many important questions remain unanswered:
Anyone have an AAR? Was the new CE a hit at the con?
Posted at 9:32 AM 10 comments:

The Madness continues tonight at CEO

The second session of the March Madness league at Cosmic Encounter Online is scheduled for tonight (8E/5P), and it appears that last week's bugs have been squashed.

The early leaders are all tied at one win apiece. Here they are:

New league pods are go, yo!

It looks as if this Thursday's second March Madness league night will feature the new group of pods mentioned below. 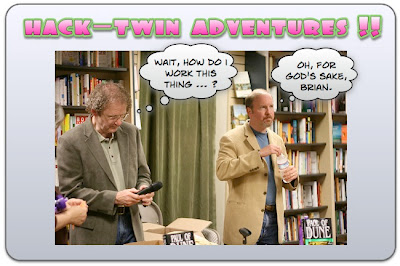 Winds of Dune, the upcoming new "Dune" book — and those quote-marks are there on purpose — is so bad that it causes computers to crash. Alleged "writer" Kevin J. Anderson says so right on his self-indulgent Twitter page.

So it's time to give thanks to Shai-Hulud, once again, that Hack One and his idiot friend Frank Herbert's Son had nothing whatsoever to do with the classic Dune boardgame. Nor will their input be needed for the upcoming Twilight: Dune.

Bless the Maker and all His Water. Bless the coming and going of Him, May His passing cleanse the world. May He keep the world for his people.

March Madness, that is. That's the name of the upcoming league at Cosmic Encounter Online, which begins on Thursday. There's even two bonuses:

Bonus #1: The league will be hosted by none other than Peter Olotka, designer of the original Cosmic Encounter boardgame.

Bonus #2: All kinds of new pods will be added to the deck. Here's the list:

Full details can be found at CosBlog.
Posted at 5:46 AM 10 comments:

I'm offering a $5 bounty** for the first player to record an encounter total of 505 or greater in any league game at the upcoming March Madness league.

And just how in the cosmos would one score a 505, you might ask? Easy!
Voila! Instant crisp $5 bill for you! 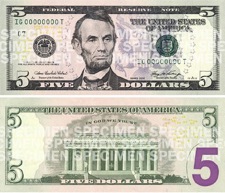 Note also that the bounty would be payable for, say, having six ships and playing the 99 pod ... or even eight ships with the 65 pod. Any total of 505 or more is a winner.

Rules? There are two:
Keep in mind that I'm in my 12th year of using Photoshop. I will spot any attempts at fakery in far less time than it would take to construct them.

I'd prefer to pay the winner (if any) via PayPal, but it's not an absolute requirement.

**If the winner (if any) would prefer, I'll just buy them a month-long membership at CE Online, instead.
Posted at 9:20 AM 7 comments:

And speaking of tournaments ...

Here's what looks like a good one for anyone who might be in the Atlanta area for MomoCon on the weekend of March 14-15. This information comes from our own Big Head Zach, writer of many strategy articles and tweaker of much Cosmic Encounter Online code:

We'll be running games of C.E. all weekend, free to play, open to anyone who wants to jump in! However, if you want a shot at some cool prizes, you can purchase tickets to have the games you play count in a running competition that lasts until Sunday afternoon, where the top 5 players will square off in an Ultimate Showdown of Ultimate Destiny (tm) to see who is the Supreme Ruler Of The Universe, Bwahaha (tm).

The entry fee is $5 to have your games tracked. This fee is reduced to $3 if you are in a sci-fi themed costume (please, cosplayers, come have fun where I can see you!).

All games will use the 4-Planet variant (for quicker games), and feature 30 of the 50 aliens in the box (picked to allow variety but minimize newbie frustration). There are no other changes from the basic rules.

The plan is to have two copies of the game available to play (meaning 10 people can be playing at any given moment). If players cannot decide how to group themselves together to play, the staff will randomly seat people.

That's the basic version. For the full announcement, follow this link.
Posted at 8:53 AM 17 comments: 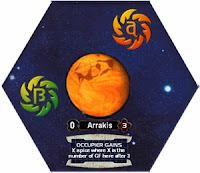 I'd say that's a pretty fair question. And, being gamers, I'm sure we all have lots of ideas. To start things off, there's a bunch of interesting points in this discussion at the FFG boards.

I have a good starting point: if there's going to be the equivalent of the Bene Gesserit's co-existence rule, then just, for the love of all that is holy ... make ... it ... clear.
Posted at 2:23 PM 6 comments: 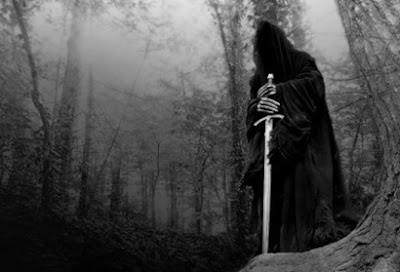 Plain-English power: Ships in the Warp add to your combat total.

Loved by: Necromongers; Warp fetishists; Jack Reda**; the win-inverters (Spiff / Loser / Anti-Matter) are fascinated. Zombie and Void tolerate Warpish because they will never contribute to his cause.

Loathed by: Virus and Citadel (competition, especially competition they end up creating), Chosen (necromancy is an abomination against the Divine), Shadow / Vacuum/ Cudgel (unwitting accomplices).

Anything else? Warpish is one of the few aliens to theoretically get more powerful as its board position gets weaker. However, it's still common for Warpish to rely mostly on the suffering of others to fuel his undead fleet. Better them than him, right?

— Submitted by Zach Gaskins
**Message from Jack: "Not especially. Surprised?"
Posted at 8:56 AM 7 comments:

The good: The ever-popular "Upcoming Products" page — arguably the most talked-about page at the entire Fantasy Flight Games site — has been relaunched, following a long hiatus, with a spiffy new format.

The bad: Not a single word about the new Dune game. Or Twilight: Dune. Or Dune: Imperium. I can't decide what to call it this week.