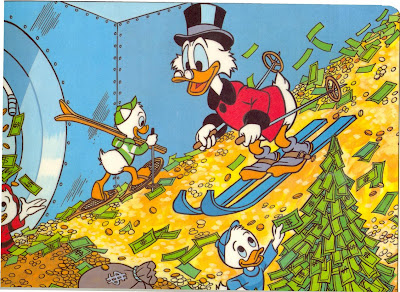 Plain-English power: You have two hands of cards.

Loved by: Greedy guys, those who like a safety net.

Loathed by: Card-stealers, those who enjoy pounding their enemy's hand, Han Solo.

Anything else? Miser appeared twice in major CE expansions, but never in a base set until the FFG edition.

Great strategy post, Toomai. I've never quite known what to make of Miser. It was the one power I never felt I had a good grasp of its essential strengths and weaknesses. Now I do; thank you sir!

When I played Miser with Eon, I wanted a good flare in my hoard hand. While still vulnerable to a flare zap, an "at will" flare was quite strone, never to lose due consolation or needing to get a new hand. If the hoard didn't have a good flare but my regular hand did, then I'd play my hoard hand for challenges, to keep my regular has as long as possible.

Email Marketing
very hwndy, thanx a lot for thi blog .. This is exactly what I was looking ofr.