Incursion: It's a work of pure genius 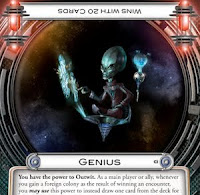 First reaction: another clever alternate-win alien. And I'm a card-hoarder, so this one automatically gets my seal of approval.
Posted at 12:45 PM

It looks good! Cosmic thanks to you for regularly bringing up information and comments.

Well it doesn't take a Genius to play this power. But I see a few weanesses. Other players will be playin N to rip it off. I ounters by Winning in the regular fashin VS the Ns.

I went up against this Alien in a playtest. Even worse, it was being played by it's creator Eric Lang!

I found it actually a kinda creepy alien to play against. In the playtest he never took foreign colonies, never took ships as a defender reward, and never played a card to save a ship. He just sat there on his home worlds, winning encounters and letting his hand swell...

Yes, I haven't tested it yet, but it seems quite clear that you shouldn't invite Genius to help defend.

And as our grand exalted master Olatka just wrote before, I guess than using Ns against Genius (at least while attacking it) can deplete its hand quite effectively.

I meant : our grand exalted master Olotka. Sorry... (But I am probably already in disgrace now =P)

Genius is fun because he has to really commit to the alternate win, rather than trying to have it both ways like Tick-Tock might. If Genius forgoes taking a colony, he's already behind in the traditional way. Yes, you can play negotiates on him, but that doesn't mean you'll get any good cards necessarily- never mind the fact that you have to lose an encounter to do it. Not many people are thrilled to take one for the team like that. And if you negotiate when he's attacking, you may take compensation, but he's still collecting cards. Genius is tough to beat- not impossible, but it takes more than one player to stop him.

You realize, of course, that the classic Wild Filch Flare becomes an I Win The Game card for Genius. The player just has to time it right, and it's worth "accidentally" getting caught the first time.