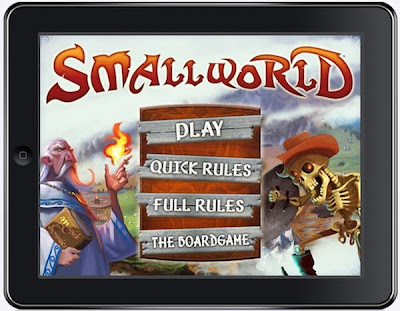 I'm back to dreaming of one day playing Cosmic Encounter on the Apple iPad.

Saturday's announcement that Days of Wonder's Small World boardgame was being released in a digital version in the iPad App Store ($4.99; here's a handy link) was a welcome surprise. Not only is Small World a pretty fun little game on its own, but it shares a number of features — light basic rule-set, races with variable powers, social aspect, etc. — with a game we have discussed quite a bit around here.

Small World serves as proof that interesting boardgames can be done for the iPad (and, peeking into the future, for whichever directions mobile computing takes in the next few years). This isn't yet another app for hearts, or poker, or a Yahtzee variant — it's a beautiful recreation of a very popular boardgame. It can be done, and it can be done well.

So why not Cosmic Encounter? Well, as Cosmic Encounter Online owner Peter Olotka is quick to point out, time and money are two big factors. But those are hurdles that can be overcome — they might not be easy, but they can be conquered. And, once they are, I really see no reason at all why we won't someday be playing CE on our iPads. Picture the following set-up:
That's all off the top of my head. It seems like a win-win to me: the owners of the CE brand can generate some much-needed revenue beyond CE Online; veteran CE players will feel like they've died and gone to heaven; newcomers — and there would be hundreds, at least — will experience a classic game for the first time.
Posted at 11:36 AM

Hi, I ԁо believе this is a greаt web sitе.
I stumblеԁupоn it ;) I'm going to return once again since I book marked it. Money and freedom is the greatest way to change, may you be rich and continue to help others.

Here is my homepage http://888aka.com
my web page > AmericasCardRoom Offer

I've read some excellent stuff here. Certainly worth bookmarking for revisiting. I wonder how much effort you set to make one of these wonderful informative web site.

Feel free to surf to my webpage: 888 Poker Offer