Cosmic Encounter in the cloud: FAST! 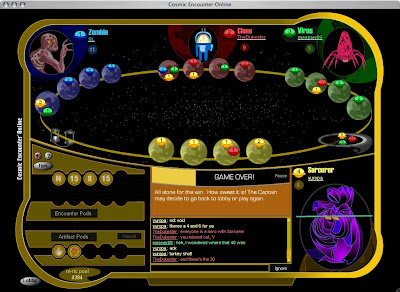 The Thursday test of Cosmic Encounter Online running on a cloud-based server seemed to be a smashing success. With about 90-percent of the game totally functional (things such as Join In Progress were turned off), the site performed at top efficiency, supporting many rooms of players and a chatty lobby. At one point, in fact, players were encouraged to post as fast as they could in the lobby, which has often been a problem area in the past. The result: not even a minor hiccup.

To the best of my knowledge, no players reported any errors or issues with lag. I personally had one laggy moment, but I'm 99-percent sure the problem was on my end, as I've really been struggling with AT&T for the last couple of weeks. Other than that, I didn't hear of any other players having issues.

The hope is that this could lead to a better experience in all areas of the game. A faster experience, combined with some bug-fixes and new aliens, would also be just the ticket to draw in a new generation of players and entice some of the old-school veterans to return.

We will keep everyone posted as we clean up the loose ends and move the game to the cloud.

Cosmic Online is in the Cloud for good! Everything is up and running. We also closed down the defunct Forum. The cloud has eliminated all LAG issues. We will kill off the few remaining game issues like disappearing chat and disappearing Enter buttons - and then turn to new features. We want to add some Fantasy Flight Aliens...any suggestions???

Oh, you meant Cosmic? I'd like to see Hacker or Human.

But seriously. Rex! I need it.

Cudgel
Remora
Magician
Leviathan
Citadel (I love this alien but it seems like it would be hard to program).

any1 whose looking for a game of CE online hit me up on
AIM: barciaboy5463