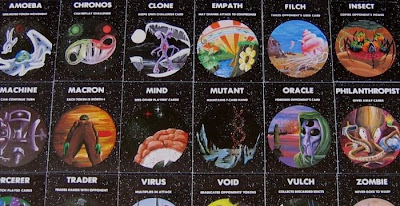 Plain-English power: After you lose any ships, drop your old power and get a new one.

Loved by: Cosmic fans who thrive on chaos and love to innovate.

Loathed by: Long-range strategy types. Insect and Plant should be wary of this alien power.

Anything else? The Wild Reincarnator is a crazy Flare, and most Cosmic. The game practically spirals into chaos as players reincarnate!

I'll add my own favorite Reincarnator note: of the 75 original Eon aliens, it's one of two (possibly three) that's not an actual English word.

There's some debate over Macron, too. It appears in some dictionaries as some sort of obscure printing thing, but I think the intention of the alien name was clearly to come up with a name that sounded BIG. So I count it as one of the three.

Anyway, this was a nice one for our halfway point. Reincarnator, in some ways, is THE classic CE alien.

The macron is a phonetic symbol for marking long vowels (basically a hyphen "-" over the letter). Sure, it's an obscure word, but that makes it no less of an English word. As for whether the author knew this or by coincidence made up a word that already existed, I wouldn't know, but I think the concept does apply in a way, though definitely less directly than most alien names.

Or maybe the phonetic marker is actually named after the alien!

You must be a HIT with the ladies ...