Who will be king of the Cosmic mountain? 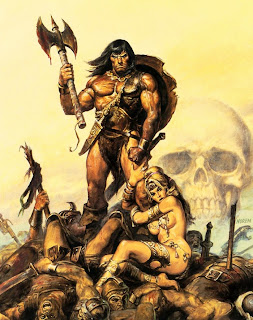 Things are still very, very close at the ongoing Alphabetical Aliens league at Cosmic Encounter, where six players have at least two wins, but only one has at least three. The latest standings, heading into tonight's action, can be found here.
Interested parties should also note that a new qualifying procedure is in place. Rather than set an arbitrary number of minimum games played to be eligible for the finals, the number will be determined by computing an average number of games played for all players. This makes much more sense, and it will allow a greater degree of flexibility (busy leagues will have a higher minimum-games-played number than less-busy leagues, but both will be using a valid method to determine the finalists). I hope this new qualifying procedure remains in place for all future leagues.
Posted at 10:52 AM

The minimum game rule never sat well with me. This is great thinking.

It should be noted that the rule is actually the average of all players with at least TWO games played, but I didn't want to make the original post even more bland than it is. That part makes a lot of sense, too, because it tosses out all of the players who might have stopped by just once, never to be seen again.

I came up with it when I got to the point of trying to see who would qualify for the two % slots. I saw the Dukester sitting with 100% in a 1 - 0 record and figured to nip that in the bud :)

I want to roll into a new league after the alphabet finals (after a couple of weeks break). We will pick a different night to enable players who never can make Mondays to play.

I was mulling something with a foreign colony x2 plus home colony x 1 kicker to impact standings...any thoughts?

I think that would be absolutely great as long as the site can track that information for you. If you expect the players to report how many colonies they had, you'll probably end up with mixed and inaccurate reports.

Also, very glad to see another night is being considered. I always forget about league on Monday.