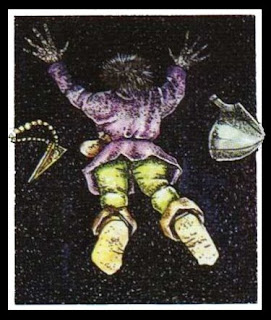 Plain-English power: Win and throw your enemy's ships out of the game permanently.

Loved by: Guys who like being intimidating; evil people; masochists (and Masochist).

Anything else? While Void in previous versions could remove a player from the game by eradicating too many ships, CE Online and the FFG edition prevent a player from losing so many ships that they become unable to win.
— Submitted by Toomai Glittershine
Posted at 10:07 PM

Editor's note: Other than some minor edits, I've been pretty much running these articles just as the authors submitted them. I've also agreed, generally, with each of the six strategy points that the various authors have included with their entries.

But ... just for the sake of discussion ... I'll say that I'm not real wild about the last one presented here. I've never worried about using the Tubes when Void is in the game; it's not HIS ships I'm really worried about. I don't mind being down in the total ship-count as much as I mind trying to play out the endgame with something like 11 or 8 ships ... or, God forbid, even fewer. If I've got 'em, those Tubes are getting played.

But, either way, I'm certainly not going to edit it out just because I happen to disagree with it. For any potential authors out there who are uncertain about this, rest assured that unless a strategy point actually breaks the rules or makes absolutely no sense whatsoever, it will run pretty much as written.

Anyway ... thoughts on Void? On using the Tubes with Void in the game? Maybe there's something I'm not seeing here.

Generally, if I've been a victim to Void constantly, I want what few ships I have back in play. Sometimes though, if I see it'll benefit him more than me, yea, I'll reconsider. However, I'm a good CE player, so I never go to Warp. ;)

So, who else got the joke with that picture accompanying the article?
Ah, memories.

I forget, does Void also eliminate ships during failed negotiations?

OK, I give up. It seems like I should get the picture joke, but I don't (and I'm hardly a whippersnapper). Please?

It's the "Horrible Black Void" card from Talisman (the Adventure expansion, technically). It meant insta-death for the unlucky player to draw it ... and hilarity would ensue.

Interestingly, it was part of the first alternate-ending rules for Talisman, which ties in a bit to some of the alternate-ending stuff we've been discussing here. Pretty rough ending in this case, though.

Both aliens activate when the ships are supposed to be sent to Warp. Seems like a clear case for invoking the timing conflict resolution rules to me.

Without actually looking at the cards, I'd have to say that I agree ... it seems like a clear case of going to the timing rules.

I'd forgotten how useful that timing tie-breaker can be for FTF games. I'm finding that many, many rules arguments come down to powers (or flares) that are activating in the same phase. I'm way past long, drawn-out CE rules arguments; just give me that tie-breaker, baby.