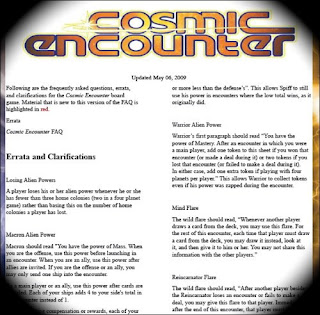 While going over Fantasy Flight's official Cosmic Encounter FAQ today, it occurred to me that the document really is the first of its kind. Despite a 30-plus-year history, CE has never had an official** FAQ of any kind, with simple poor timing being a big part of the reason.
Consider the history:
(All of which reminds me: you know what other classic game from the same era could really use an official FAQ? Dune. Big-time. Not a bizarre Q&A session that many people have attempted to pass off as a FAQ over the years, but an honest-to-God real FAQ. Anyone who doubts this needs to poll 10 experienced Dune players and ask them exactly how Bene Gesserit co-existence works.)
Wait, I'm digressing. Where was I? Oh, yeah: welcome to the Cosmic family, Mr. Official FAQ Document. Now prepare to be picked apart.
**Official = a FAQ produced by the publisher. Unofficial = all other attempts at FAQs, no matter how well-researched or well-intentioned.
Posted at 10:55 PM

There are a number of rulings I don't really agree with, but I'm just glad to have rulings, so I won't bother house ruling them (except Gambler Vs. Sorceror) for the sake of consistency.

By the way, how'd you get that image? I know Toomai has put up an abridged version all in text, but I'd love to see the full version like that if possible.

Maybe he edited the transparency of the text box in the PDF (so it's completely opaque instead of see-through).

There wasn't much to it:

1. Took a screenshot with SnapzPro;

2. Edited the image in iPhoto, which has some basic special effects (that one is "vignette");

3. Saved the new image as a basic JPEG.

Thanks, I'll have to see if my Mac at work has iPhoto.

I wonder if the FAQ will be in the expansion.