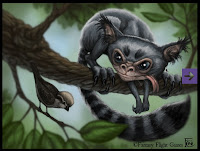 From the very first days that Cosmic Encounter developer Kevin Wilson began sending me the raw files for the new Fantasy Flight Games edition of the game, I was immediately struck by the wonderful (proposed) artwork for the alien cards. I think it's pretty safe to say that CE is receiving its best treatment ever in terms of art (although I'll always have a soft spot for Dean Morrissey and the other Eon-era artists).

I've had CE artist Felicia Cano's website bookmarked ever since Kevin told me she was working on the game, and it gives me great pleasure to finally be able to link to her site publicly. She's very talented, and she was a great pick for the new edition of Cosmic.
Posted at 11:15 AM

Ok there we go I finally got myself in with a user account properly!