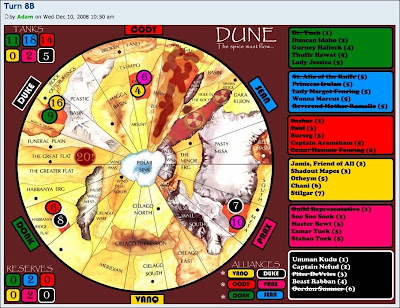 There's been many times, both here and over at the old blog site, where I wished I could figure out a way to include more Dune content. It's such a fantastic game on a number of levels: faithfulness to the source material, unique and interesting mechanics, and — not least — entertainment value. And, of course, it bears some striking similarities to Cosmic Encounter, which is not a huge surprise when you really think about it.

I was reminded of all of this today when I finished an absolutely spectacular game of Dune that featured more twists and turns than the old Space Mountain ride. It probably helped that I ended up winning, too** — those are my black Harkonnen pieces on the map, poised to control Arrakis with their faithful Fremen sidekicks. Mere moments after that map image was posted, it was game-over-thank-you-for-playing-drive-home-safely. As The Man said: "Veni, vidi, vici, Dune-i."

In all seriousness, any Cosmic Encounter fan who just hasn't gotten around to checking out Dune yet would be doing themselves a favor if they rectified that oversight. Good places to start are here, here, and here. Tell them Baron Vladimir sent you.

**There was also some goofy-ass Bene Gesserit thing at the very end. I'm scoring it as a three-way win.
Posted at 8:21 PM

You worked so hard for my solo win, don't deny it ;]

Prediction win! That was classic. I wondered if we'd ever see a prediction win, and it only took 10 games for it to happen, which is pretty good considering there are six factions and three alternate victory conditions (we haven't seen the Fremen one yet, either).

Why is Sting's real name listed under the Harkonnens instead of Feyd-Rautha? :)

Are you running Dune software or is this just a picture of your game?

No software. That's just a screenshot from the final map positions.

We just took an image of the map from Colin Sorvan's site, aka the ultimate Dune game resource, and fancied it up on Paint.NET. I can make the file available to anyone interested in hosting a Dune forum game. We've gone through a lot of different map styles, and I think I'll stick with this one for awhile at least because it is pretty well organized. Send me a message if interested: adamxpaul@gmail.com.