Bruno checks in with a mixed review 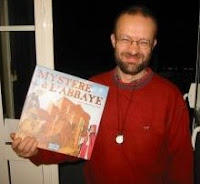 Bruno Faidutti is one of my all-time favorite game-designers, having caused me to go into brain-burn during many, many hours of games such as Citadels (my second-favorite variable-powers game ... and you guess the favorite) and Knightmare Chess. The "Ideal Game Library" feature at his website is mandatory reading for any fan of boardgames, and now it's been updated with a revised entry for Cosmic Encounter, reflecting the new Fantasy Flight Games edition.

The review, frankly, is mixed, with Bruno clearly longing for the complete chaos from the days of playing with the Eon aliens and throwing in flares, moons and lucre. Although he lauds the professionalism and overall design of the FFG edition, Bruno closes with an interesting thought:

Anyway, now that the FFG has proven, with this edition, that they can make their job seriously, I hope they will take it much less seriously in the expansion! And even in a slightly watered down version, it's still the second best edition of the very best game ever.

I reckon there is plenty of time to loosen the restraints as it were... it's smart of FFG to ease people into CE. Some people, for whatever reason, get turned off by too much chaos too quickly. I for one hope to see MANY expansions, which when added together will make for the most riproaringasscrazy game of CE I've ever played.

Thanks for the link - I discovered this blog among the places from where my visitors came this week, and I'll visit it regularly from now on.

1. Welcome, Bruno! I'm humbled that a designer of such cool games would visit my little corner of the web.

2. "Riproaringasscrazy" ... I do believe Jack has made up a great word. Anyone know the procedure for submitting something to Webster's?

Accident Need Save Yourself, Save the World For any car automobile accident personal injury Lawyer and Attorney Advice Also, all automobile and car insurance quotes guidance for free