Origin(s) of species: the 50 FFG aliens 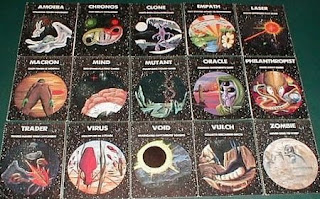 Here’s a breakdown of the initial Cosmic Encounter appearances for the 50 aliens included in the recently released Fantasy Flight Games version of the game:

2 are from Cosmic Encounter Online:
Mite and Tripler.

Instant analysis: overall, it's a very interesting mix. I’m particularly satisfied with FFG’s decision to search the cosmos for 13 essentially new aliens, and I’m also impressed by how many old-school aliens are still making the grade today. Eighty percent of the original base set from 1977 (12 of 15) is included in CE’s 2008 re-release, along with 70 percent (7 of 10) of Expansion 2.
Posted at 9:05 PM

Tons of credit to Kevin Wilson at FFG as well as to the CE fans who gave advice and contributions.

I will also say thanks to Kevin (and Peter) for USING fan contributions.

Can we get a list of who submitted what? I know Jack's was Fodder. Hacker was based on GK's Violin. Mine is Cudgel (have I mentioned that?) That's about all I know.

Remora is Kevin's ... Fido is Brandon Freels ... Masochist is Matt Stone ... Human was from an idea of mine, modified by Kevin W. He should probably get the credit, but he's nice enough to list me in the rulebook, anyway.

Those were off the top of my head ... Jack R. probably knows the rest.

I believe that Hate was Erik Lang's & Citadel was another one of Kevin W's.

Observer is, I believe, from Cedric Chin.

The essentially no-power Human goes back ages, actually. Of the Mayfair exclusives, Chosen was chosen? Jeez.

Oh... and why does Assassin get renamed, but Dictator doesn't? Is genocide just TOO abstract a concept? Or is it a matter of function?

Last chance to take five seconds to use some form of user ID here. I'm going to look into shutting off anonymous comments.

His name is Dictator, not Genocide. It's okay though. No one said reading was easy.

I'll answer that since I may be responsible for the Dictator comment; I brought up a similar line when Peter announced potential new names years ago. Assassins kill counts usually are in the single or low double digits. But Dictators like Hitler, Stalin, Hussein, Pol Pot (and here's where the Original Star Trek would insert an alien sounding name and planet) are indirectly responsible for the deaths of millions. So if it's the NAME of the real-life counterparts that're offensive then, to me, Dictator should have been renamed as well as Assassin, Bully (altho I do prefer Boss), etc.

PS Love the new location Duke. Lot easier to access from my cheapo accelerated dial-up. Just wish I had more to contribute these days.

Yes, but that is not really the definition of a dictator. An Assassin by definition is someone who murders for hire. You can theoretically be a benevolent dictator.

Personally, Terrorist is the only one I think needs a renaming, though if Wrack is released, his power text could probably be changed. I think it was power to torture, not sure.

But it doesn't hurt to rename them, so I don't mind. What's in a name?

In a way, it seems kinda goofy to worry about being sensitive with a game that's about galactic conquest and eradicating ships, and demons that possess, and diseases that spread, and extortion, and reeky filth and thieving filches, and vengeful grudges, and blinding lasers, and schizoids... doesn't having a Pacifist counter all that? There are no innocent ships in the game... it's war!

Wow! Quick response!
Assassins don't necessarily do it for money... I might be coldblooded, but I think Terrorist needs to be renamed just slightly MORE because it's a misnomer. Real-life Terrorist's target noncombatants and civilian places. Anything else is guerilla tactics. "Colonies" or "Bases" are fair game once war is declared.

Actually, I was gonna mention Demon. One time (not in band camp) a player of the LDS faith resigned a game when he saw Demon was in. Sorry Duke for clogging up your comments with this nonsense!

1. I'm glad you like the new location, Fidd. I do, too. I'm finding Blogger easier to work with than TypePad. Not to mention that it's a free service.

2. The only mandatory re-naming that I see would have to be Terrorist. I'm not saying I **agree** with why it would have to happen, just that it **will** have to happen. There's no way an American-based company could get away with naming a component of a game "Terrorist." Maybe it's caving in to PC interests, maybe not. But 9/11 wasn't **that** long ago.

I'd say change Terrorist (but not to Booby) and Wrack. I'd leave Bully and Demon unchanged, if published. Personally, I wouldn't have changed Assassin either, but I don't really mind.

Re/ the new powers, nobody claimed Hate, Kamikaze, or Tick Tock.

Tick Tock, in particular, is extremely creative. It's really not similar to any other power, that I'm aware of.

Demon has always struck me as seeming a bit out of place and overly dark / serious for Cosmic. Terrorist is a bit, too. I would change Demon not to please worried mothers but just so it would fit in better with what I think of as a rather lighthearted game, despite its vague undertones of cosmic war waged with mysterious numbered cards. Perhaps renaming Demon to Jinn or something else that means essentially the same but is foreign enough that most people won't think too much about the meaning even if they know what it is.